Cannabidiol for the Treatment of Cannabis Use Disorder

This study assesses cannabidiol, which inhibits the reuptake of endocannabinoids, as a treatment for cannabis use disorder.

Freeman et al. (2020) conducted a phase 2a, randomized, double-blind, placebo, controlled, clinical trial investigating the healing properties of cannabidiol for cannabis use disorder. Participants, aged 16-60, were selected based on their desire to stop using cannabis, but were also required to report an unsuccessful attempt to quit cannabis-use, as well as meet requirements for a positive THC-COOH urine sample. Participants were responsible for taking their medication throughout the study every twelve hours and were required to give urine samples in compliance with the study. Notably, all participants during this trial were given six motivational interviewing sessions led by trained psychologists, in addition to their cannabidiol treatment.

The study saved resources by using Bayesian modeling for dose predictions, comparing a given dose’s efficaciousness with that of placebo to predict optimal dosages. Cannabidiol efficaciousness was measured by a reduction in urinary THC-COOH: creatinine ratio and an increase in days per week abstaining from cannabis use. Initially, 48 participants enrolled and were randomly assigned to a placebo, 200mg, 400mg, or 800mg (1:1:1:1) treatment group. A second trial was run with 34 new participants, excluding the 200mg treatment group, as the probability of efficaciousness compared with placebo given observed data fell below the lower threshold of .1 (at .0082).

The analysis measured the absolute difference in treatment effects between treatment groups and placebo. The final analysis showed that cannabidiol 400mg and 800mg significantly decreased THC-COOH: creatinine ratios as well as increased days per week abstaining from cannabis use. Thus, cannabidiol, at the 400 and 800mg doses, has the potential to reduce cannabis use disorder. The analysis suggests that the 400mg dose is slightly more effective than the 800 mg dose, thus negating potential benefit of doses higher than 800mg. 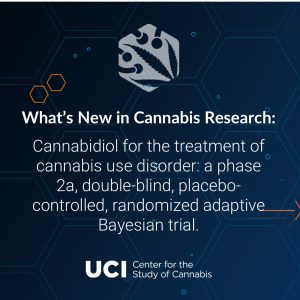