Cannabinoid receptor activation on both immune cells and colonocytes is critical to prevent colonic inflammation.

Cannabinoid receptor activation is known to ameliorate inflammatory bowel disease (IBD) in animal models, but the contributions of other factors in combination with receptor activation remain unstudied. Cannabinoids bind to G protein coupled receptors CB1 and CB2. Two widely known exogenous ligands for CB1 and CB2 are D9-tetrahydrocannabinol(THC) and cannabidiol (CBD). Becker et al. (2020) sought to understand the role of cannabinoids as well as the microbiome, hematopoietic cells, and enterocytes in the treatment of IBD/colitis.

THC and TCH+CBD significantly reduced inflammation and weight loss compared to CBD alone and VEH control in both models—assessed by colonoscopy, flow cytometry, histology, and detection of serum biomarkers. Analysis found THC alone as effective as THC+CBD in attenuating acute colitis, both in the DSS-induced and TNBS-induced models.

Significantly, THC-mediated increases in mucus were specific to the lining of the colon, illuminated by the finding that DSS mice treated with THC had gut leakage while TNBS mice did not. The study also found that THC’s attenuation of colitis was not dependent on changes in bacterial composition despite THC’s increase of gram-negative bacteria in the colon. This was affirmed by administering antibiotics to VEH or THC mice in a subsequent DSS-induced colitis model. Hematopoietic cannabinoid receptors were found, however, to mediate the THC-induced increases in TCA cycle and fatty acid metabolites.

The study revealed a role of both CB1 and CB2 receptors in colitis models: THC treatment in  mice lacking either receptor had no effect. Overall, Becker et al. report a dynamic interplay between hematopoietic cells, enterocytes, immune cells, and cannabinoid receptor activation contributing to colitis improvement. 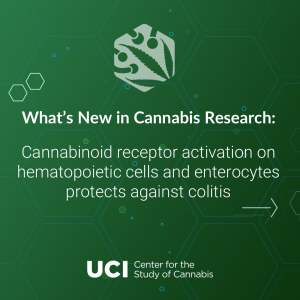