Self-reported Daily, Weekly, and Monthly Cannabis Use Among Women Before and During Pregnancy

Currently, there is not enough significant data to conclude that THC or any other cannabinoid is harmful to a developing fetus. This study of 367,403 pregnancies among women in Northern California, reports that the relative rates of daily, weekly, and monthly cannabis use in the year before and during pregnancy increased from 2009 to 2017. Cannabis use in the year before pregnancy nearly doubled, increasing from 6.80% to 12.50% from 2009 to 2017. In addition, the study found that 96% of those who used cannabis during pregnancy also used the year before they were pregnant. This paper also reported that daily cannabis use increased the most rapidly, reaching 25% of women who used cannabis during the year before pregnancy and 21% among women who used during pregnancy in 2017. There needs to be a significant increase in educational and prevention efforts focused on reducing prenatal use in order to combat the dramatic increase in online resources/social media sites that provide incomplete information suggesting that cannabis is safe in treating pregnancy related symptoms. Future research should be focused on determining the toxicity, if any, of THC and other cannabinoids ingested before and during pregnancy. 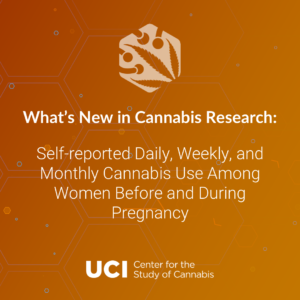