Cannabidiol’s anxiolytic effects have been demonstrated in several studies. However, the mechanism for this effect remains to be elucidated. The present paper offers additional data that may aid in future research in understanding endocannabinoids’ role in anxious behaviors. Over 900 participants were recruited to take part in the genetic analysis of cannabinoid receptor two (CB2) in chromosome one. A polymorphism leading to an amino acid change from arginine to glycine (R63Q) was identified. Interestingly, individuals who maintained the genes coding for arginine scored higher in depression and anxiety scales. In addition, a single amino acid change from cysteine to alanine (C385A) was noted in the gene coding for fatty acid amide hydrolase (FAAH) which is an enzyme that degrades the endocannabinoid anandamide. Of note, individuals who have the R allele in CB2 and A allele in FAAH were found to have the highest scores on the psychometric scales that were used to determine depressive and anxious phenotypes. The genetic associations found in this study provides further justification for the need for more robust genetic studies in order to understand the endocannabinoid system’s role in psychiatric disorders. 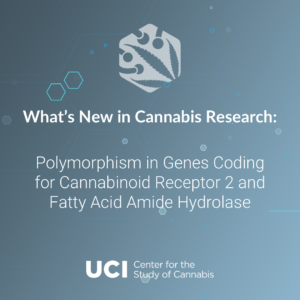