Due to the increasing rates of tobacco and cannabis use co-occurrence among individuals seeking treatment for cannabis use disorder (CUD), appropriate timing of tobacco intervention (TI) initiation is important in maximizing the effects of both the CUD intervention and TI. The present study compared the difference in treatment outcomes among individuals with CUD who received TI and CUD intervention simultaneously or CUD intervention followed by TI. The results showed no significant difference in cannabis outcome between the two groups indicating that the addition of TI during CUD treatment had neither positive nor negative effects in CUD treatment outcome. Notably, 39% of individuals in the sequential group attempted to quit despite having not been exposed to the experiment’s tobacco intervention. This finding may allude to the utility of simultaneous treatment of CUD and tobacco dependence. Although some of the hypotheses of this study were unfounded, and treatment outcomes were poor in both groups, this study presents a good starting point in exploring the practicality of simultaneous treatment of both cannabis and tobacco use disorders. 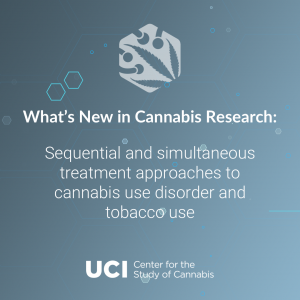